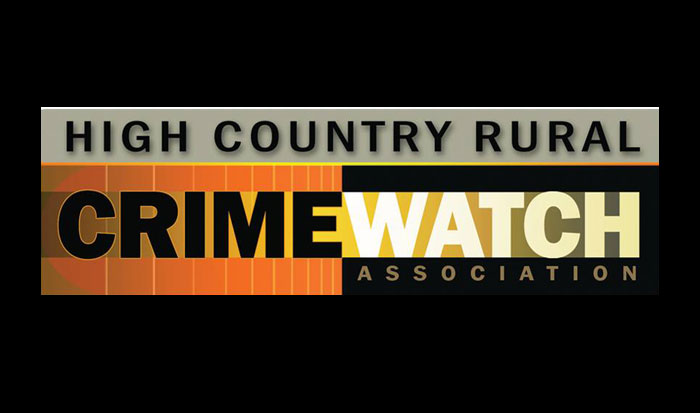 What is the HCRCWA Anyway?

Many of us have a vague idea of what the High Country Rural Crime Watch Association is, but what is it really, and what does it do?

HCRCWA’s mission statement is “To safeguard people and property in all our rural communities through awareness, communications and education.”

Approximately 800 people/addresses have signed on to HCRCWA including some who are outside of the actual HCRCWA boundary. Membership is free due to the generous support of TC Energy. The HCRCWA website www.hcrcwa.ca has an online membership application form as well as plenty of additional info and maps.

HCRCWA Goals are: Awareness will be achieved through membership development, public meetings and support from local businesses. Communications will include an updated membership database fan- out information system for email and phone notifications, information sharing with local RCMP, website development for information flow and resource connections, public relations and use of print or other media.

HCRCWA sent approximately 36 fanout messages in 2018, 17 in 2019, and 16 so far in 2020. Most members receive notifications via email, but there are some members who receive notifications via a recorded phone message mostly due to the fact they are not internet connected. HCRCWA does not share email or phone lists with any outside party. HCRCWA has a Facebook page and a 403-931-2407 phone line.

While fanout messages usually concern criminal activity with information supplied from the RCMP, we will also include messages about public safety (the 2018 McLean Creek wildfire), some relevant Foothills County administrative messages especially as it relates to fire bans, and notices of upcoming events such as living with dangerous wildlife seminars and personal safety talks.

There are three basic sources of threat to your and my safety living out here in the foothills: 1) criminal activity, 2) wildlife encounters, and 3) wildfires. HCRCWA attempts to, and does, periodically address all three of these threats through fanouts and seminars.

For example, at the Square Butte Hall session in November of 2018 we had speakers from the RCMP, Foothills Fire Department, Foothills Emergency Management, and Alberta Forestry. The Alberta Forestry presentation included personnel who were responsible for managing and fighting the McLean Creek wildfire. They gave a “play- by-play” of their efforts to bring the blaze under control using on-ground personnel, heavy equipment, and firefighting aircraft.

The Foothills Fire Department and Foothills Emergency Management were there to explain the criteria and process for anticipated evacuations which, fortunately, were only voluntary in this instance. This is probably a good time to remind everyone that we live in the second highest forest fire danger area in the province. Be sure to implement FireSmart practices if you haven’t already done so.

In May of 2019, a Wildlife Conflict Solutions Workshop was held at the Old Rothney Farm on the Ann & Sandy Cross Conservation Area whereat Jay Honeyman, a Human Wildlife Conflict Biologist from Alberta Environment and Parks (aka Southern Alberta bear expert), headed up a group of, in his words, “some of the most qualified bear experts in the world”. There were informative presentations of bear behavior and activity and, outside in the field, you would have been able to practice deploying inert bear spray in front of a model bear hurtling downhill toward you.

In October of 2019 Representatives from the HCRCWA personally met with then Justice Minister Doug Schweitzer to present recommendations for combatting rural crime.

These are just some examples of HCRCWA activity.

All of us at the HCRCWA would like to wish all of you a Merry Christmas and a very Happy Holiday.