Last Sunday afternoon Amarin and I (32 year residents of the BC area) snuck in a spontaneous overnight canoe trip along the Bow River from Calgary down to Carseland. The water was a bit turbid with the beginning of the freshet, but the scenery was beautiful and the birdlife abundant. However, not as abundant as the insect life. Every riffle was effervescent with Mayflies, Stoneflies and Caddisflies rising to the water surface and emerging into their winged adult stages. Fish were supping on the abundance, but what really was amazing were the hundreds of Franklin Gulls swirling over our heads and around our canoe at each pool. We’ve been dazzled by these birds before: In Bragg Creek in 2017 and 2018. This coincidence is the substance of this note.

By the end of June, Redwood Meadows is initiating an aerial spraying program of the pesticide Bt-K to kill Western Spruce Budworms. The pesticide targets the insect order Lepidoptera (butterflies, moths and skippers) and is not toxic to humans. But what are the other effects of this pesticide? Our species seems to have difficulty relearning that everything is connected to everything else. And that is true here.

The western spruce budworm (WSB; Choristoneura occidentalis of the family Torticidae) eats spruce and fir needles of western coniferous forests, and periodically reaches outbreak levels. In Alberta outbreaks occur about once every 10-20 years and peak over a few years. Trees can tolerate up to ten defoliation events and old or sick trees can succumb to the infestation. White spruce and Douglas fir (in the southern Foothills) are typically infested and Engelmann spruce and SubAlpine fir comprise a lesser target by C biennis at high elevations.

The moths mate and lay eggs in late July- August. The female deposits up to 150 green shingle-like eggs on the needles. Newly hatched larvae do not feed but seek shelter under bark scales and emerge in the spring from silken webs. They begin feeding on newly swelling needles, going through 6 larval stages before maturing as the brown spotted caterpillar, about 25mm long. In mid-July they pupate in brown segmented cases and emerge as brown mottled moths. They disperse over many kilometers to seek new sites to start the mating and egg laying cycle again, especially if the immediate forest is infested.

Spruce Budworm populations are modulated by climate (wind can blow caterpillars off trees and late frosts can kill populations) and spiders, beetles, and flies (esp Diptera) also predate on the budworms. Venier and Holmes (A review of the interaction between forest birds and eastern spruce budworm, 2010) showed a strong relationship between some bird populations and budworm populations. The most affected species were insectivorous warblers like the Cape May and Tennessee Warblers, both present in the Foothills.

Around 1960, forest harvest companies working with government agencies developed the pesticide, Bt-K using the natural, soil-dwelling bacterium Bacillus thuringiensis, variety Kustaki. The pesticide is particularly effective on larvae of the insect order Lepidoptera, which we noted comprises moths, butterflies, and skippers. The bacteria produce crystal proteins during sporulation, called insecticidal delta-endotoxins. Different proteins work against different insects by attaching to specific binding sites in the insect’s gut. They only become active once dissolved in the alkaline gut environment. The bound proteins form holes in the gut, which eventually leads to death of the caterpillar over a few days. Bt-K is widely used to eradicate infestations of Eastern Spruce Budworm Choristoneura fumiferana and gypsy moths Lymantria dispar. Bt-K sprays are not toxic to honeybees, birds, or mammals such as farm animals, pets, and children as forestry agency Bt-K “fact sheets” and logging companies are quick to point out.

While there have been many studies on the effect of Bt-K on spruce budworm and gypsy moth larvae, there have been relatively few on the collateral effects of spraying. The most comprehensive study was “Long Term Evaluation of the Effects of Bacillus thuringiensis kurstaki, Gypsy Moth Nucleopolyhedrosis Virus Product Gypchek®, and Entomophaga maimaiga on Nontarget Organisms in Mixed Broadleaf-Pine Forests in the Central Appalachians” edited by Strazanac and Butler, 2005. They showed that the Bt-K reduced Lepidoterid caterpillars by 40- 90%, decreased populations of spiders by 40%, Carabidae beetles by 80%, predatory flies by 50%. Worm eating warblers (30%) and towhees and juncos (50-80%) while nestling weights were reduced by 16%. Bt-K treatments are not toxic to predatory spiders, beetles or birds but these beings depend on budworms for their reproductive success and thus are demonstrably impacted by pesticide treatments.

In 2017 and 2018, the Bruce Spanworm (Operophtera bruceata, green “inchworms” and hunters moth) infestations defoliated much of the aspen along the Foothills from the Crowsnest River to the Bow River, including Bragg Creek. Patches of aspen trees were eaten clean of leaves and the web strands made trail walking here like a Halloween horror house. Those years, at the height of the infestation in early July, the cries and swirling flight of hundreds of Franklin gulls occurred every evening up the Elbow and adjacent hills, especially along Two-Pine ridge near our home. This small scale “Miracle of the Sea Gulls” reduced the infestation to the point where leaves began growing back by August. In 2019 the leaves were a full crown. No other treatment necessary. Our trip on the Bow reminds us of the oscillations in population between prey and predator in maintaining ecological balance.

Insect infestations are one of these natural oscillation in our forests. On top of drought stress, they can be a disturbance on the scale of wildfire as British Columbia saw with the Pine Beetle outbreaks in 2001-2002. The present budworm oscillation is not such a habitat restructuring event. For the sake of the many other supporting actors in our ecosystem, I would ask the residents of Redwood Meadows to reconsider plans for aerial Bt-K spraying and let the insect and avian predators do their work on the Western Spruce Budworms. If you have a spruce tree you are particularly concerned about, consider spraying those individual trees with a hose application of Bt-K. Please don’t forfeit all of next spring’s Morning Cloak and Fritillary butterflies, mosquito-eating spiders, and warbler songs. They cannot make their case, so we try. Thank you. 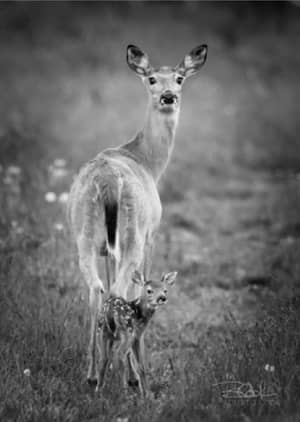